And The Best Dressed Goes To…

While watching all the stars arrive at the 83rd Academy Awards show tonight, I really have to sift out some stand-out dresses. I felt many of the actresses went a little safe this year. I understand the Oscars isn’t the award show to take fashion risks, but still, the “glam” was definitely dialed down a notch this year, but I will say I was quite impressed by all the vibrant colors that were represented tonight on the red carpet.

The stand-out color of the evening was bright red! This flaming hot color sizzled on the likes of one of this year’s Best Actress nominees, Jennifer Lawrence, as well as, Sandra Bullock and Jennifer Hudson. The most fashionable lady in red, however, goes to the fabulous Ms. Anne Hathaway in a vintage Valentino Couture archive dress. As pretty as these ladies are in red, the color just didn’t excite me as much, at least not among the selections of red dresses this year.

What I was really drawn to were dresses that were shiny and had some sparkle. Amy Adams was stunning in a royal blue L’Wren Scott dress, accessorized with green-jeweled Cartier necklace and bracelet that completed the look beautifully. A dress that also shined, but was a lot more understated, was Gwyneth Paltrow’s Calvin Klein metallic dress. A prime example of going glam, but not going overboard. It’s subtle chic at it’s best and she was a shoe in for one of my “Best Dressed” of the night. Another contender in my “Best Dressed” of the night was none other than fashion icon, Cate Blanchett in a soft pink/lilac Givenchy Couture stunner! Regal comes to mind! This dress was probably one of the more daring dresses of the evening, but as you can see, it’s still a little on the safer side. From the intricate details on this dress and the pop of yellow to the perfect length of the dress… Cate really brought it this year!

Other fashion highlights from the evening includes newly Academy Award winner, Natalie Portman, who despite being more than halfway through her pregnancy, wowed many folks, including myself, in an ethereal purple dress by Rodarte (could’ve done without the tassel earring though). Her equally talented and fashionable Black Swan co-star, Mila Kunis, chose an Elie Saab Couture dress in lavender, which works perfectly on her skin and on the red carpet! Lastly, four-time Oscar-nominee Annette Bening looked radiant in Naeem Kahn. This vintage-inspired style incorporates a modern sophistication, all while being a completely age-appropriate dress for her. 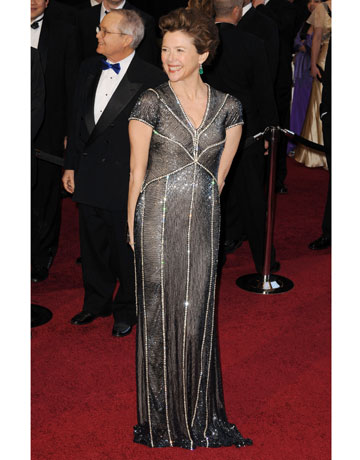 Some looks that I have to, HAVE TO, mention are dresses that weren’t seen on the pre-show. That’s right, I’m talking about one of this year’s co-hosts, Anne Hathaway, who luckily had many outfit changes this evening. Up until the moment the show began, I didn’t have a distinct favorite outfit that I could remember… that is until Anne Hathaway emerges with the adorable co-host, James Franco, in a creamy bustier Givenchy Haute Couture dress. I thought, “Finally! A dress to get excited about!” I immediately found my “Best Dressed” for the night! I know it’s not fair since she was able to have so many outfit changes, because if we’re basing who wore what best solely from what they wore on the red carpet, the new Catwoman would not have had a chance to win this title! My other favorite look of Anne’s from during the show also include, a burgundy Atelier Versace gown and an asymmetrical Oscar de la Renta silver beaded dress with tassels, which she swung gleefully on stage during the show.

So to wrap up, there weren’t any real disastrous looks this year. Most played the safe card, style-wise, many did redeem themselves with me by choosing non-traditional hues that brought a little more life and color to a kinda dull red carpet. I hope next year will be the return of that “Hollywood Glam” I’ve come to expect from the Academy Awards!